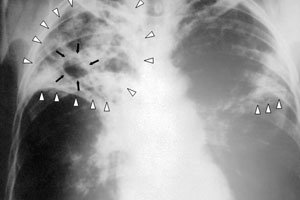 Alarm with TB “out of control”

AUSTRALIA needs to ramp up its response to drug-resistant tuberculosis as difficult-to-treat strains become more common in neighbouring countries, according to infectious diseases experts.

In an editorial in the latest issue of the MJA, Associate Professor Paul Johnson, deputy director of infectious diseases at Austin Health in Melbourne, said that drug-resistant TB is “out of control” in several regions of the world. (1)

Because asymptomatic TB infection is followed unpredictably by active transmissible disease, “there is no practical way of isolating Australia and New Zealand from TB drug resistance”, he said.

A study in the MJA found that almost one-third of recently arrived refugees in Darwin tested positive for latent TB. (2)

The first case of extensively drug-resistant TB (XDR-TB – the form that is most difficult to treat) in New Zealand is also reported in the latest MJA. (3)

Dr Johnson told MJA InSight that primary care had a key role to play in managing TB. “Due to the sub-acute nature of the disease, people with TB generally present to primary care first, not hospitals”, he said.

He recommended that GPs consider TB as a potential diagnosis in people who were born overseas, particularly those who have arrived within the past 5 years.

“If these patients have a cough or fever, think TB right from the beginning, and consider making an early request for a chest x-ray”, Dr Johnson said.

GPs should also specify they are considering TB on their pathology requests, because TB testing is not automatically performed on routine sputum samples.

The NZ case report highlighted the difficulties of managing XDR-TB in a country with a low prevalence of TB. It took more than 2 months to confirm that the sample was extensively drug resistant, and second-line drugs then had to be imported from the US.

Dr Johnson proposed that to reduce delays, laboratories should consider introducing molecular technology for screening primary specimens when TB is suspected. These tests provide TB and rifampicin-resistance results within a few hours. This would probably be cheaper than delaying diagnosis or mismanaging resistant TB cases, even in low-incidence countries like Australia and New Zealand.

He acknowledged that molecular testing was an emerging and expensive technology, but said the quality was improving and costs decreasing.

However, Dr Konstantinos said testing all samples would put an “incredible strain” on resources and cautioned that molecular tests had not been tested widely in a low-risk population. He recommended molecular testing for all initial TB-positive smears but only for smear-negative isolates where the clinician had indicated a high pre-test probability for TB.

“It’s a problem we’ve been fighting for years … drug companies aren’t interested in going through the process of getting the drug registered in Australia because there are not enough cases here.”

The NZ case occurred in a 29-year-old immigrant from Burma with no history of TB. The authors of the case report said this reinforced the need for “strengthening laboratory support networks and TB surveillance systems in South-East Asia”.

However, the federal and Queensland governments have reportedly agreed to close clinics in the Torres Strait Islands providing TB treatment for Papua New Guinea nationals, although AusAID says it will continue to work to build PNG’s capacity to treat TB.

“I remain very concerned about the closure of the Queensland treatment program for PNG nationals if there is not a consistent program on the other side of the Torres Strait,” Dr Konstantinos said.