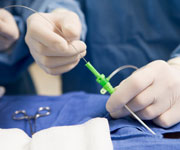 An American trial has found that transcatheter aortic valve implantation (TAVI) provides a viable alternative to open-heart surgery for high-risk, operable patients with severe aortic stenosis. Outcomes for open-heart surgery were also better than what the researchers had predicted.

The results from the PARTNER (Placement of Aortic Transcatheter Valve) trial were presented at an American College of Cardiology conference last week. In the trial, 699 patients (median age 84 years) were randomised to receive either TAVI or surgery. The study aimed to prove non-inferiority of TAVI, with all-cause mortality at 1-year used as the primary end point.

Professor David Celermajer, professor of cardiology at the University of Sydney, described the study findings as “huge”. He said the research was promising for both TAVI and surgery.

“The study shows that TAVI is a viable alternative, while the death rates in surgery were lower than the researchers expected,” Professor Celermajer said.

“The main take-home message from this research is that something should be done for the frail elderly patient with severe aortic stenosis. The best individual treatment option should be decided by a team of surgeons and cardiologists working together,” he said.

While the TAVI procedure was already in use in several Australian hospitals and clinics, it was a very expensive technique, Professor Celermajer said.

The number of patients choosing to drop out of the PARTNER trial was much lower in the TAVI group, suggesting that patients favoured the percutaneous procedure. Only one patient in the TAVI group refused treatment or withdrew from the study, compared with 28 patients in the surgery group.

While mortality rates were comparable in both groups, major strokes and transient ischaemic attacks were almost twice as common in the TAVI group after 1 year.

Mr Michael Rowland, a Melbourne-based cardiothoracic surgeon, said the stroke rates had the potential to outweigh the benefits of TAVI. “Some patients I talk to say that coping with a stroke is worse than death,” he said.

He said the study was well designed and reached its aim of showing that TAVI is non-inferior to surgery, however further research on “soft end points” would be useful.

“Mortality is a starting point but it is a fairly crude measure — functional capacity and quality of life are also important.”

Mr Rowland said TAVI was also a fairly new technique and the full implications of the research would become apparent as clinicians gained more experience with the procedure and knowledge of the prosthesis used.