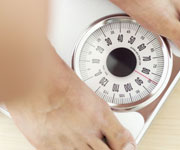 THE clinical importance of a BMI history to assess a patient’s risk of coronary heart disease is highlighted in a new study that followed a large cohort of men for 17 years from adolescence. (1)

The study, reported in the New England Journal of Medicine, found that an elevated body mass index (BMI) in adolescence — even within the “normal” range — was a “substantial risk factor” for obesity-related disorders later in life, particularly coronary heart disease (CHD).

The study also found that the risk of diabetes was mainly associated with an elevated BMI in adulthood, closer to the time of diagnosis.

The study followed 37 674 men who, when initial measurements were taken, had a mean age of 17 years and a mean BMI ranging from 17.3 in the bottom decile to 27.6 in the top decile. Mean age at first assessment was 30 years and the mean BMI decile range in adulthood was 21.4 to 30.6.

During follow-up, there were 1173 documented cases of type 2 diabetes and 327 incident cases of angiography-proven CHD, diagnosed between 25 and 45 years of age.

Taking into account age, family history, blood pressure, physical activity, smoking status and levels of cholesterol and triglycerides, elevated adolescent BMI was a significant predictor of the incidence of angiography-proven CHD in young men across the entire BMI range, with a hazard ratio of 5.43 (95% CI 2.77 to 10.62) in the top decile.

The study authors said that, because of the current obesity pandemic, it was important to determine whether an elevated BMI in childhood, adolescence or adulthood, or an increase in BMI during the transition from adolescence to adulthood, contributed independently to the risk of disease.

They used data from the Metabolic, Lifestyle, and Nutrition Assessment in Young Adults (MELANY) study of the Israel Defense Forces Medical Corps and followed apparently healthy young men. BMI was measured at adolescence and into early adulthood to identify incident cases of type 2 diabetes and angiography-proven CHD.

The study excluded men with previously diagnosed type 1 or type 2 diabetes or CHD at adolescence.

“Diabetes is influenced mainly by recent BMI and weight gain, whereas for coronary heart disease both elevated BMI in adolescence and recent BMI are independent risk factors – that is, the natural history of coronary heart disease (in contrast with that of diabetes) is probably the consequence of gradually increasing atherosclerosis during adolescence and early adulthood that leads to clinically important disease in midlife.”

The authors said that as their conclusions were deduced with BMI values “well within the range that is now defined as normal”, the study may help to redefine what constitutes a “normal” and “healthy” BMI in adolescence.

It also highlighted the role of elevated BMI at different ages in the pathogenesis of different diseases.