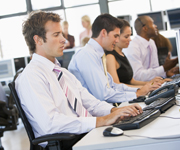 “ACTIVE couch potatoes” who have been in a sedentary job for more than 10 years have a risk of distal colon cancer two times higher than those in a more active job, according to Australian research. (1)

Researchers from the Western Australian Institute for Medical Research at the University of WA found the positive association between sedentary work and colorectal cancer was independent of recreational physical activity and was seen among the most recreationally active participants.

They said the finding fits with the “active couch potato” phenomenon where high amounts of sedentary behaviour and physical activity coexist.

The WA Bowel Health Study, a case–control, population-based study, took place between 2005 and 2007 and involved men and women aged 40 to 79 years who lived in WA. Self-administered questionnaires on lifestyle, diet, occupation and medication use were completed by 918 patients recruited from the WA Cancer Registry and 1021 age- and sex-matched controls.

The researchers said there were several plausible biological mechanisms to explain why sedentary work and behaviour in general increased the risk of colorectal cancer, including the fact it increased blood glucose levels and decreased insulin resistance, which were both thought to promote colorectal cancer carcinogenesis.

“There is no clear mechanistic explanation, however, for why sedentary behaviour would increase the risk of distal colon and rectal cancers, but not proximal colon cancer.

“The findings of this study have occupational health implications, especially given that advances in technology have led to increasing amounts of sedentary behaviours at work and in other settings,” they said.

The authors said that as sedentary work was unlikely to be eliminated from modern life, strategies to minimise the time spent sitting, especially in long bouts, were needed.

An increasing level of sedentary behaviour had been linked to an increased risk of several other chronic diseases, as well as increased mortality.

“Sedentary behaviour appears to be a novel and important risk factor for many chronic diseases,” the researchers said.