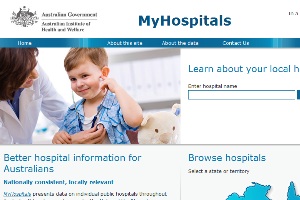 Shaky start for My Hospitals

THE long-awaited MyHospitals website, allowing easier comparisons of waiting times against national benchmarks, is embroiled in controversy, The Australian reports. Within hours of it going live, there were claims its data was too old to be useful and the states had sought to hamstring the project. The site, which allows public viewing of the waiting times for public and private hospitals in areas such as orthopaedic surgery and emergency departments, partly delivers on Labor’s 2007 election pledge to improve the reporting of hospital data.

GPs go paperless
ALMOST two-thirds of GPs have switched to paperless medical records, with the others maintaining a hybrid mix of paper and electronic records, The Australian reports. The latest annual report from the Bettering the Evaluation and Care of Health (BEACH) survey of GPs shows 98% are using computers for some clinical purposes. Desktop systems were used by 85% to print out prescriptions, while 72% receive pathology test results online and 54% also order pathology tests online.

Aspirin cuts cancer deaths
ASPIRIN has cemented its place as the world’s original wonder drug, with a study showing it cuts the death rates from a range of cancers, The Australian reports. A review of data from eight previous trials found patients who took just 75 mg of aspirin a day had dramatic reductions in death rates, with benefits continuing long after they stopped taking the pill. The findings, reported in the Lancet, showed aspirin could cut deaths in at least eight specific cancer types, over periods as long as 20 years.

Action on antibiotics
HUNDREDS of Australian scientists, clinicians and pharmacists are calling for urgent national action to deal with our growing resistance to antibiotics, ABC News reports. The Australasian Society of Infectious Diseases and the Australian Society for Antimicrobials are organising a summit to be held in February next year on the issue, which the World Health Organization describes as one of the greatest threats to human health.

Nicotine patches on PBS
THE federal government wants smokers to make 2011 the year to kick the habit, The Age reports. From February next year, concession cardholders will be able to get nicotine patches under the Pharmaceutical Benefits Scheme, chopping a monthly bill of about $140 down to $5.40 a script. Health Minister Nicola Roxon also announced massive subsidies for lifesaving drugs for men battling prostate cancer and the 70 Australians suffering from a rare blood disorder who need the drug Soliris (eculizumab).

Revolutionary TB test
THE World Health Organization has endorsed what it says is a revolutionary new way of diagnosing tuberculosis, ABC News reports. The test can be done on the spot in 100 minutes compared to the weeks and months it has traditionally taken in a highly equipped and secure laboratory. It is expected to help save many of the 5000 people who die every day worldwide from the treatable lung illness.

Sunscreen cuts melanoma rate
AN Australian study appears to show that can sunscreen actually help to prevent melanoma, the Courier Mail reports. A study conducted by the Queensland Institute of Medical Research tracked a group of 1600 residents in Nambour, Queensland. It showed that wearing sunscreen every day for 5 years cut the incidence of melanoma over the next 10 years in half.

Review of treatment for dying
THE NSW Health Department is to overhaul the treatment of dying patients in public hospitals, as it grapples with mounting concern that frail elderly people sometimes receive excessive and futile therapy, the Sydney Morning Herald reports. A wide-ranging review would produce a single policy governing the treatment of dying people, bringing together disparate advice on resuscitation, palliative care and the withdrawal of treatment, its co-chairman, Greg Stewart, said. A legal ruling last year, confirming the right of patients to refuse lifesaving treatment via the use of advance care directives or living wills, has increased the urgency of the review, which is expected to report next June.

Cancer breakthrough predicted
SCIENTISTS say they are on the verge of acquiring their most valuable weapon yet against cancer, the Brisbane Times reports. Leading international cancer researcher Professor Michael Stratton said obtaining the genetic make-up of the disease, expected in the next 5-7 years, would give scientists the key to unlocking the secrets of what causes it. He said they may even be able to determine the influence of outside effects, which could help solve several mysterious cancer clusters, such as the 18 cases of breast cancer at the former ABC site in Brisbane.