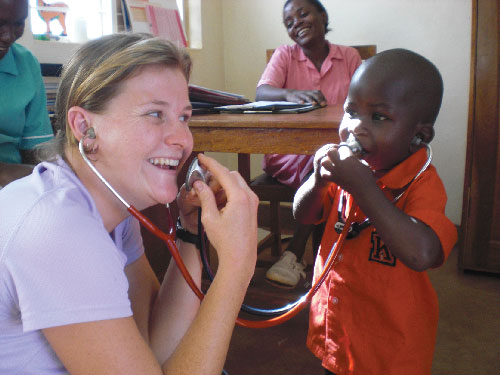 I AM an Australian doctor training in paediatrics under the Royal Australasian College of Physicians. I also intend to train in anaesthesia.

I decided to take a year-long break from the training scheme to do humanitarian aid work in a developing country, and I am now coming to the end of a 6-month sabbatical in Uganda.

This personal perspective on paediatric and obstetric care provision in Uganda aims to illustrate some of the stumbling blocks in practice that are limiting progress towards the United Nations Millennium Development Goals in maternal and child health.

My time in Uganda was divided between the obstetric operating theatre of the National Referral Hospital in Kampala, and responsibility for a paediatric ward in rural Uganda at a not-for-profit mission hospital, run jointly by the local Catholic diocese and an international non-government organisation.

Every morning on arrival at the obstetric theatre I was greeted by women waiting, lining up in the entrance hall or lying on plastic sheets on the floor of the ward, contracting in pain.

However, each woman waited in turn for her operation or spontaneous delivery, whichever came first.

When her turn came, the patient would walk into theatre and struggle onto the operating table with minimal assistance, pausing only for a grunt or grimace during a contraction.

We hand-ventilated one baby for an hour because there was no mechanical ventilator.

My colleagues and I decided to undertake a 1-month audit to review maternal and neonatal outcomes: were there avoidable delays for emergency caesarean sections, and could anything be done about them?

The maternal mortality rate in my sample of 435 was 1%, the stillbirth rate was close to 7% (equivalent to the hospital’s 1968 rates) and mothers waited on average for 5 hours for the emergency procedure.

Reasons for delays included staff unavailability, a lack of running water, a non-functional autoclave (and hence no sterile drapes and gowns), and no spinal needles or drugs for spinal anaesthesia.

As a result of the audit, the hospital expedited the building of two new obstetric and gynaecological operating theatres and undertook to ensure that highly qualified and experienced staff ran them.

Mothers are advised to bring a delivery pack when they come to hospital — not a dressing gown, slippers and baby clothes, but their own cannulae, sterile swabs, suture materials and 10 packets of sterile gloves, in case the hospital supply runs out.

During my second week, a woman in her seventh pregnancy joined the section queue.

Her indication for surgery was obstructed labour at 38 weeks gestation, with a “poor obstetric history” that translated as six previous stillbirths.

She waited patiently in line but when it was her turn there were no gloves in stock and she had brought only one packet.

She waited while women with gloves had their procedures.

Her blank emotionless expression when the surgeons told her over the drapes that her baby was stillborn will remain with me forever.

My story highlights that if basic hospital facilities were improved and some systemic delivery deficiencies overcome, more progress towards [better maternal and child health outcomes] in Uganda and all of sub-Saharan Africa would be made.

Ensuring that 90% of African mothers and newborns have access to the essential interventions already written into policy would cost a very affordable US$1.39 (A$1.45) per capita.

The full version of this article will be published next week in the Medical Journal of Australia.